In the Melnyk lab, we study a group of proteins known as toxins. These remarkable proteins, which include notable examples such as diphtheria toxin, botulinum toxin or C. difficile toxin B are among the most toxic molecules to humans known and are often responsible for the symptoms of their associated diseases Diphtheria, Botulism or Pseudomembranous colitis, respectively. We are interested in these molecules for a number of reasons, ranging from using these as model systems to understand how proteins cross membranes, to developing small molecule inhibitors to block their function, to engineering these proteins to deliver protein therapeutics into cells.

The figure shows a generic overview of how toxins like diphtheria toxin enter cells. After binding to a cell-surface receptor via the R-domain, toxins undergo receptor mediated endocytosis. Many toxins are activated in endosomes via a protease (i.e., furin) that cleaves a recognition site between the catalytic domain (A) and the translocation domain (T). Subsequently the T-domain undergoes a pH-dependent unfolding and insertion into the endosomal membrane to create a pore through through which the upstream catalytic fragment translocates into the cytosol. Within the reducing cytosol, the disulfide bind holding the A and T domains together is broken, releasing the A domain into the cytosol where it inactivates an essential host process, such as protein synthesis in the case of diphtheria toxin. 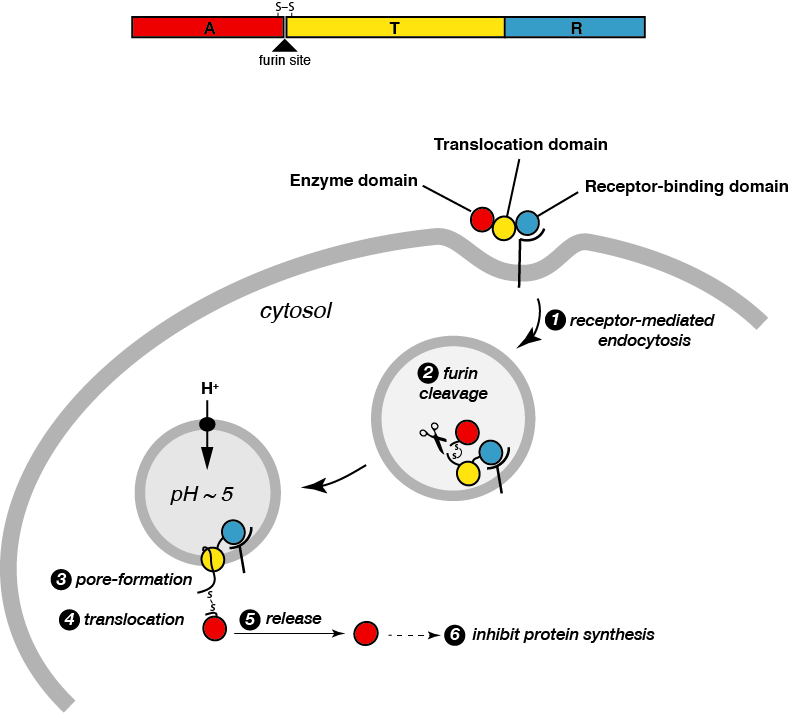 We are always on the lookout for good people that are excited about science!